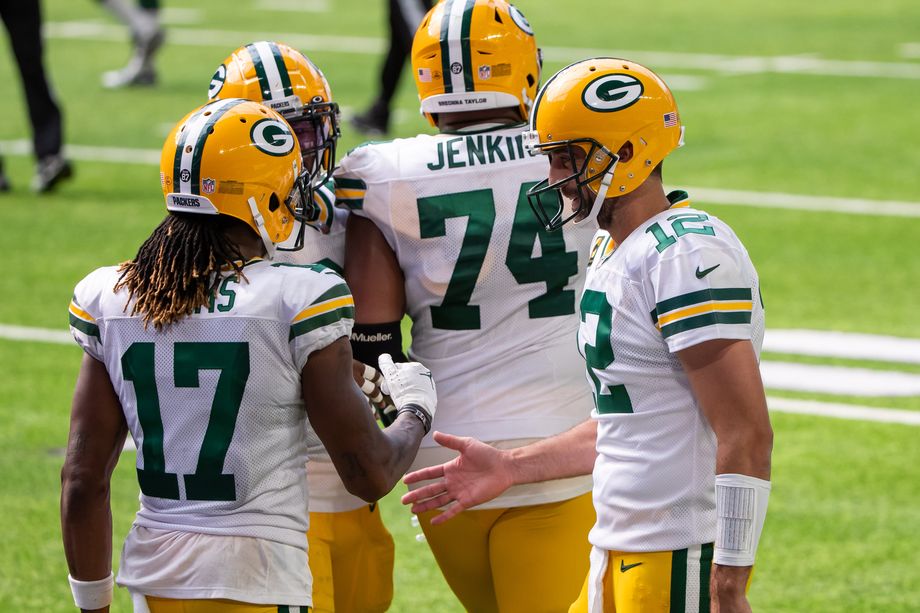 The NFL was back in full swing last week as we had a handful of intriguing games and many old faces in new places. We got to see Tom Brady make his debut for the Bucs, Cam Newton make his first start in Patriots’ uniform and DeAndre Hopkins catch his first pass from Kyler Murray! On the fantasy front, there were several head-turning performances that have me very intrigued for what is in store for Week 2. I will start off my picks for Week 2 with a man who reminded everyone how great he is.

After a lackluster performance in the NFC title game last season, the excitement for Aaron Rodgers coming into 2020 seemed to be the lowest it’s been in years. He quickly turned that narrative around with an absolutely dazzling performance against the Vikings in Week 1. Rodgers completed 72% of his passes and threw for 364 yards and four touchdowns while racking up 32.76 fantasy points. He went back to looking like the quarterback who was the unanimous choice for being the best in football. While the Vikings lost some secondary talent, they still boast a formidable defense and Rodgers tore them apart.

What is very encouraging for this week is he gets to face off against a brutal Detroit Lions pass defense. The Lions last week allowed Mitch Trubisky to throw for 242 yards and three touchdowns in their heartbreaking loss to Chicago. It is not exactly a bold take to say that Rodgers is in a different universe than Trubisky. The fact you can get Rodgers at a multiplier of 1.3X is the icing on the cake.

Other players I like at the position: Matt Ryan (1.4X), Ben Roethlisberger (1.5X)

The Tom Brady era in Tampa Bay certainly did not get off to a great start last week against New Orleans as they lost 34-23. Brady looked like he had no chemistry with Mike Evans and was overall not very sharp. Now headed into Week 2, Chris Godwin is in concussion protocol and Mike Evans is still working through a hamstring issue. Given all of this, it feels like this game has all of the makings for it to be the Ronald Jones show. He was the lead back in Week 1 carrying the ball 17 times for 66 yards. Because of the struggles of the passing game, I expect Jones to get even more carries in Week 2. In addition to that, is the team they are facing.

The Panthers had a poor run defense last season and that was with All-Pro Luke Keuchly manning the middle. Now with Keuchly retired, the Panthers seemed destined to get run over on the ground in 2020. That narrative played out in Week 1 as the Raiders lead by Josh Jacobs ran for 133 yards and three touchdowns. This game just feels perfectly set up for Jones to have a big fantasy game. What makes him a borderline lock for me is the fact he sits at a multiplier of 1.8X. If he can approach 90 yards rushing and get at least 1 touchdown, he is providing excellent value at 1.8X.

It was only two years ago when Adam Thielen was a fantasy stud and discussed as one of the best wide receivers in the game. In 2018, he recorded 113 catches for 1373 yards and nine touchdowns. Injuries and taking a back seat to Stefon Diggs tanked his season in 2019 as he played in 10 games and only recorded 30 catches for 418 yards and six touchdowns. However, with Diggs in Buffalo, Thielen has been given the chance to be the go-to option again and he certainly did not disappoint Week 1 against the Packers. Thielen caught six passes for 110 yards and two touchdowns with 31 fantasy points. He looked like the All-Pro receiver he was in 2018.

I do not see any reason why this would change as he is healthy, the clear #1 option for Kirk Cousins, and just recently turned 30 years old. He also gets to face a Colts defense that allowed Gardner Minshew to complete 19/20 passes for 174 yards and three touchdowns in Week 1. With this match-up, I think Thielen is poised for another big game and he is going to look like a steal at 1.45X.

Lamar Jackson and Mark Andrews picked up their chemistry immediately to start 2020 in their first game against the Browns. Andrews caught 5 passes for 58 yards and two touchdowns including an incredible one-handed catch in the endzone. He put up 20.20 fantasy points with a multiplier of 1X. What makes me encouraged for him this week is he has an even more favorable match-up and his multiplier is up to 1.1X. The Texans struggled immensely covering tight ends last season and that showed itself again in Week 1. Travis Kelce went for six catches, 50 yards, and a touchdown against Houston. If they were not having some much success running the ball with Clyde Edwards-Helaire, Kelce easily could have piled up more stats.

Andrews is far and away Jackson’s most trusted and talented receiving option and in this matchup against the Texans, I expect him to have a huge day. His multiplier may not bring a ton of juice but the stats Andrews will put up will account for the lost juice in the multiplier.

The Slate-Breaking Stack You Need To See – NFL Week 16