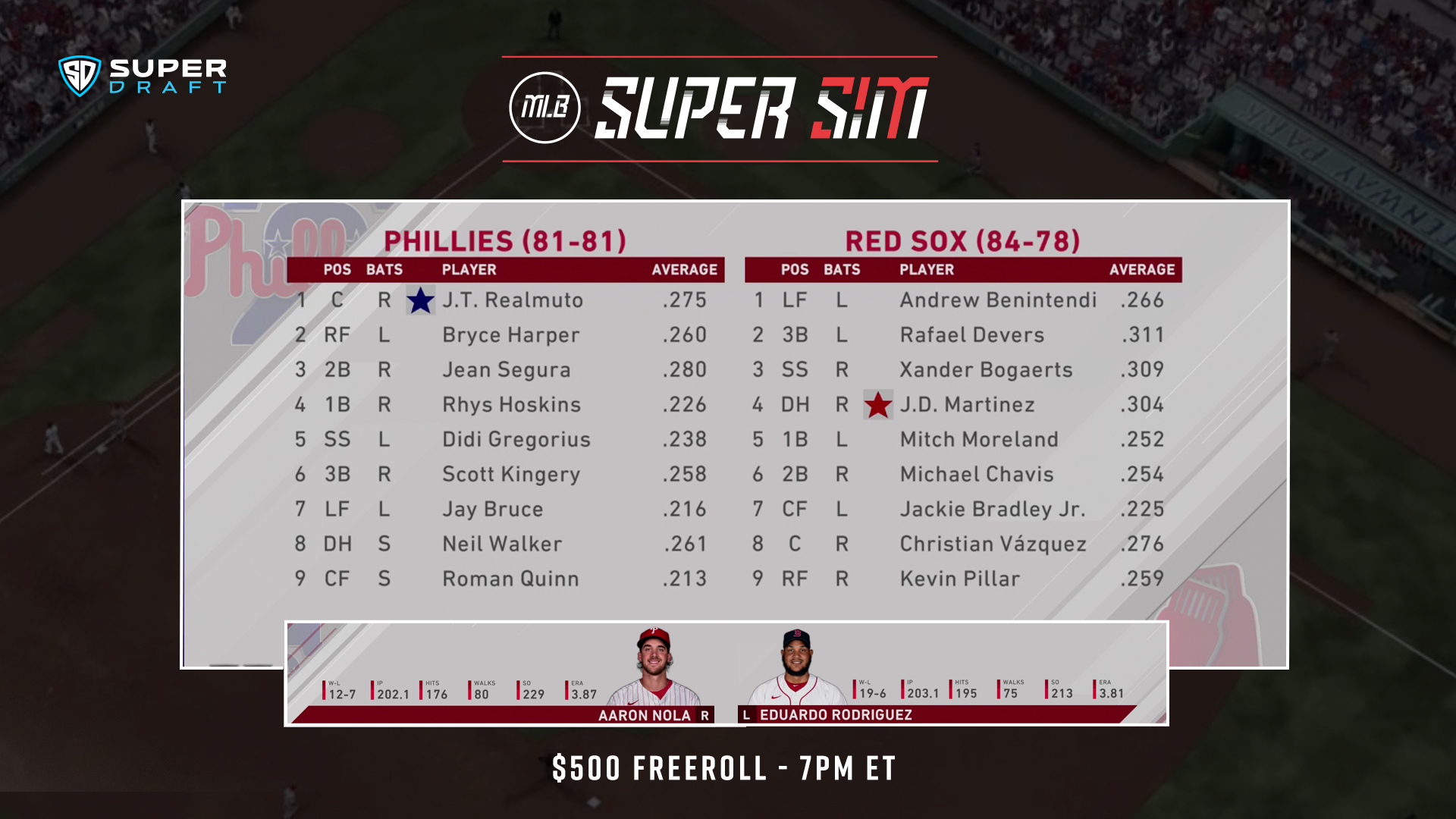 With our MLB SuperSim Freeroll tonight at 7 pm EST, I thought it would be interesting to highlight some of the players in our contest. Although both franchises taking different directions, there are plenty of bright spots to dive into. Let’s take a look at a couple of players from both squads as we get ready for the season and the SuperSim Freeroll!

Who is ready for some interleague play? You can catch the Phillies visit to the historic Fenway Park to battle it out with the Red Sox tonight! Draft your lineups to our $500 SuperSim Freeroll now! Be sure to follow the action with us live on Twitch tonight at 7 pm EST!

A Red Sox postseason hero, Nathan Eovaldi, is one of the very few bright spots in the Red Sox rotation – IF he can stay healthy. After a brutal 2019 campaign that saw Eovaldi join the bullpen after some injuries, he was having an impressive spring training. Albeit meaningless games and small sample size, Eovaldi opened eyes this spring compiling eight scoreless innings while striking out 12, walking only one and allowing only four hits.

His control is what sets him apart from other flame-throwing pitchers. His velocity is up there with the best of them, yet he rarely walks guys. In 2018, he walked only 20 batters in 110 innings of work and posted one of the league’s top BB%. Last year’s injuries caused that number to jump dramatically where he walked 37 batters in 67 innings – he was clearly not the same.

It remains to be seen if he can carry this into the regular season. However, if Eovaldi can keep it together, this Boston offense should have no trouble scoring runs to keep nasty Nate in the win column. Lord knows that the Sox will need it after Chris Sale has been sidelined this season due to Tommy John Surgery.

Alex Verdugo is the best player the Sox got back when they traded Mookie Betts to the Dodgers in the offseason. If you are not a casual fan, you know that Boston is getting a talented hitter – he is not Mookie but he knows how to swing a bat. Verdugo will undoubtedly benefit from playing every day as he only accrued 377 plate appearances last year in LA. This is not because he wasn’t talented enough to see the field but because of the Dodgers’ outfield rotation with no DH in the National League.

He made his ABs count by cranking 12 home runs and driving 44 runs while posting a triple-slash line of .294/.342/.475. Most of this came in the first half of the season where he started 66 out of the first 86 games. In those games, he posted a line of .303/.350/.489 with 20 doubles, nine dingers and 39 RBI. A couple of injuries plagued his second half and caused his numbers thereafter to plateau.

As a lefty himself, he hits opposing lefties extremely well as last season he posted .327/.358/.485 in 109 ABs. This will work well in Fenway park that has generous dimensions down both foul lines. Red Sox fan should smile because Verdugo has an incredibly high ceiling and can play all three outfield positions. I expect the pitching staff to falter, but the offense still looks to be in good shape when you add Verdugo to a core of Rafael Devers, Xander Bogaerts and J.D. Martinez.

Alex Verdugo and Nate Eovaldi are not in the starting lineup for tonight’s SuperSim. Check out the lineups on our social media pages!

This could go one of two ways, but because I don’t buy into the “Bryce is overrated” schtick, I’m going with Rhys Hoskins. Although a 29 and 85 season might not seem to be the numbers of a bounceback candidate, Hoskins has the potential to go for 40 every single season. In his sophomore season, Hoskins saw just about every stat decline from the prior season even after totaling 45 more plate appearances. He had fewer hits, runs, doubles, home runs, and RBIs. He saw a decline in average, slugging percentage and OPS. He even managed to strike out more even after leading the league in walks.

After being avoided for a lot of last season by opposing pitchers, we should see him have more chances to swing the bat with how deep this lineup is. A healthy Andrew McCutchen at the top of the order should give him more RBI chances than he already has following J.T. Realmuto and Bryce Harper and now he has protection behind him in the form of newly acquired Didi Gregorius.

Splits are not an issue for him as he is effective against both righties and lefties, he just needs help. I believe he gets some this year and puts on a show in the heart of one of the best lineups in baseball.

The Phillies got just what they were looking for when signing Didi in the offseason: solid production from the Shortstop position. Last season, Philadelphia shortstops sported the 20th ranked WAR combining for -.03 with Jean Segura playing most of the time and Didi should help bolster a lineup anchored by J.T. Realmuto, Bryce Harper and Rhys Hoskins. His four-out-of-five year streak posting a WAR of 2.3 or higher and eagerness to start new in a fresh city will pay dividends throughout the lineup.

The most exciting part of the addition for the Phillies is that Gregorius reunites with former Yankee manager Joe Girardi – a man who should not have lost his job in New York to begin with. In two years starting under Girardi, Didi averaged 22.5 longballs and 78.5 RBI while batting .282 and having an OPS of .774. Moving to a new team can be tough, but Didi is in a comfortable position playing under his former skipper and should see plenty of opportunities playing in Citizens Bank Park that allowed the seventh-most home runs per game last season.