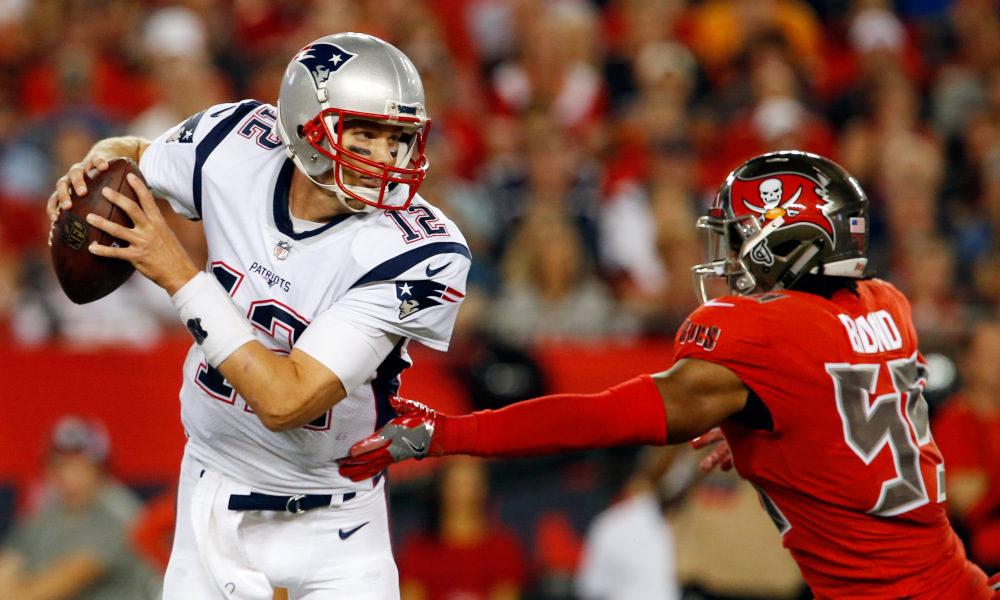 It still hasn’t really set in yet that Tom Brady, the greatest quarterback of all time, has left the New England Patriots after 20 seasons and is headed south to play for the Tampa Bay Buccaneers. You can add Brady to the list of several legends who ended their careers with different teams. Michael Jordan finished his career with the Wizards, Emmitt Smith finished with the Cardinals, Joe Montana finished with the Chiefs, Jerry Rice finished with Seahawks and the list goes on and on.

With Brady always adamant that he could play at a high level into his mid 40’s, it will be put to the test in 2020 with a brand new team at the age of 43. Given all of these circumstances, what should we expect from Brady fantasy-wise this upcoming season? Let’s get into it!

Brady had one of the worst fantasy seasons of his career last year. He recorded 4,057 yards with 24 touchdowns, 8 interceptions and 255.84 fantasy points. Despite this not being a great season, it still ranked 12th for fantasy points scored by a quarterback in 2019. He did this with a very subpar supporting cast. Julian Edelman was his only reliable target as he caught 100 passes for 1,117 yards and six touchdowns. The next best receiver on the team was Phillip Dorsett who caught 29 passes for 397 yards and five touchdowns.

Compare this to the weapons he now has in Tampa Bay, it is a night and day comparison. The Bucs sport two of the 10 best receivers in football with Chris Godwin and Mike Evans. Godwin recorded 86 catches for 1,333 yards and 9 touchdowns last year. Evans had 67 catches for 1,157 yards and eight touchdowns. In addition to that, they have the tight end combination of OJ Howard and Cameron Brate who combined for 70 catches for 770 yards and five touchdowns. Last year, Brady had the Ben Watson/Matt Lacosse duo at tight end that put up 30 catches for 204 yards and one touchdown. This giant upgrade in talent puts Brady in a much better position to improve his stats.

In addition to that, Brady will be joining a Bucs team that is coached by one of the more respected offensive minds in football with Bruce Arians. Arians has 26 years of coaching experience and has coached a number of quality quarterbacks. This list includes Peyton Manning, Ben Roethlisberger, Andrew Luck and Carson Palmer. With the collective experience between Arians and Brady, it is fair to expect that they can figure things out.

The biggest argument here is the most obvious one: age. Brady will be 43 years old during the 2020 season and there is no quarterback in NFL history who has completed a full season at age 43 let alone play well at that age. So what Brady is aiming to do is beyond unprecedented and father time is not easy to defeat. At some point, the abilities of a quarterback will fall off because that is human nature.

Based on league history, it would not be surprising if that happens to Brady next season. In addition to his age, is the fact he is on a different team for the first time in his career. He had been with the Patriots and coach Bill Belichick since 2000 and when you are at a place that long it has to be hard to then go somewhere else where everything is different. He is going to have to get used to new teammates, a new city, and a different offensive system, and new coaches. On top of that, with team-availability up in the air in regards to COVID-19 precautions, nobody is certain when he will be able to workout with his new team.

The circumstances of being a 43-year-old quarterback on a different team for the first time in his career, seem very daunting for anyone. However, if there is any man that can handle the challenge it is Tom Brady. The way he has committed himself to his craft and the accomplishments he has in the NFL is unlike any player who has played the game. If anyone can do something unprecedented, it is Brady. With the weapons he has around him in Tampa, I believe he is going to have a big bounce-back year and establish himself as one of the better fantasy quarterbacks in the league.