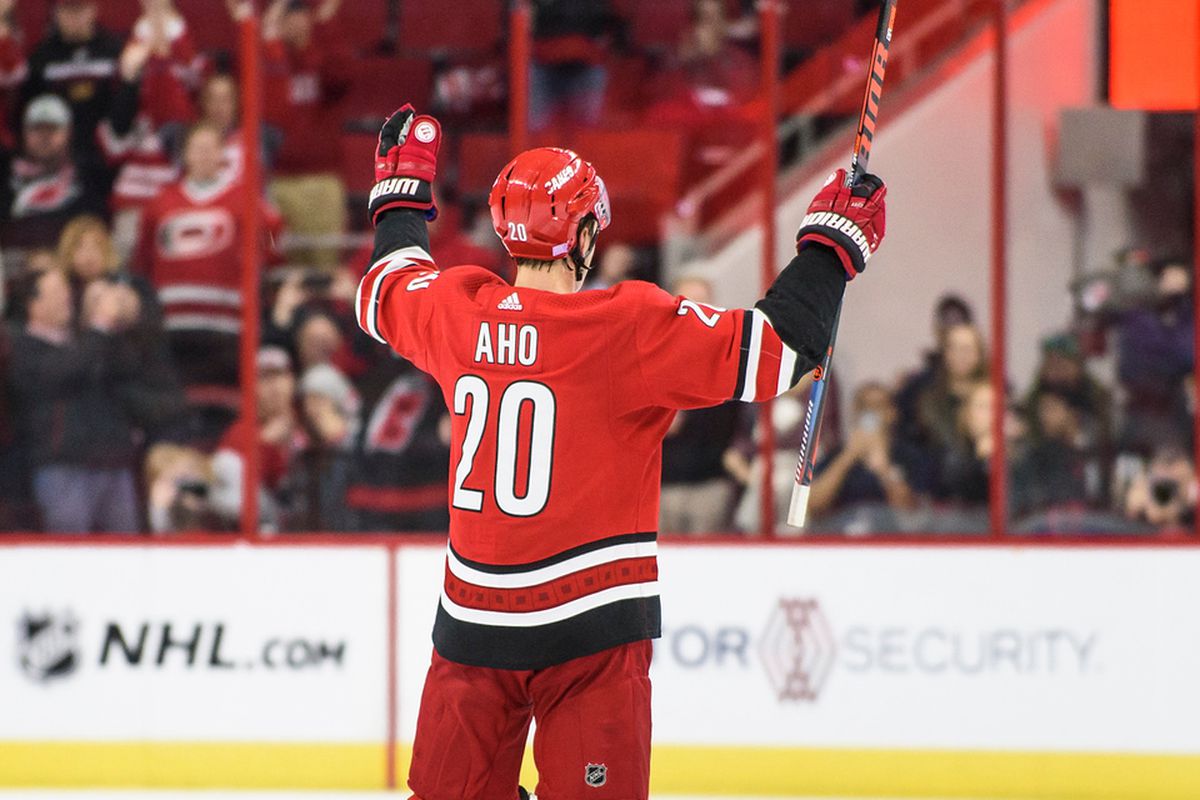 With the NBA on their all-star break, the NHL gets all the love tonight with an intimate four-game slate. There are not many heartthrobs in this slate as it’s headlined by Evgeni Malkin but for the ladies that love beards, Brent Burns is at your service. Take a look at the players I have my eye on this Valentine’s Day!

The way Aho has been playing lately mixed with his date with the Devils makes him a must-start tonight. He owns a seven-game point streak where he has tallied 11 points on seven goals and four helpers along with 24 shots on goal.

He’s averaging 8.7 SD points per game in that span and his 1.3X multiplier would have had him averaging 11.33. Aho has made my target list more than anyone this season and for good reason – he has totaled 51 points in 55 games and holds great value. Defenseman Jake Gardiner (1.95X) could make for an interesting stack as he five assists and 9 shots on goal in his last five.

I have been staying away from Crosby most of the year because of the injuries, but it is hard to ignore him at 1.35X when Montreal will be without Shea Webber. Crosby’s health seems to be stabilized as well playing over 20 minutes per game in his last 10 while tallying 14 points in that span including 21 shots on goal.

Crosby has not played Montreal yet this season but has had success against them in the past tallying 49 points in 39 career games.

Kyle Connor had zero points his last outing on Tuesday against New York but had a heck of a two-game run in his games leading up. Connor tallied seven points on three goals and four helpers in those two games adding seven shots on goal. In those games, he averaged 16.375 SD points and if he had his current multiplier it would have been 19.65.

In two games against San Jose this season, Connor totaled four points and seven shots on goal and averaged over 8 SD points in the process.

Although I am high on Connor Hellebuyck tonight, Meier holds some value with his recent uptick in offensive involvement. The five points in his last three games are great but I’m looking more at his shots on goal. Meier has 20 in his past five games and has been playing well with the veteran Joe Thornton by his side.

In his last three games, he is averaging 8.5 SD points per game and that elevates to 11.9 with his multiplier. If anyone is going to get by Helly, my money is on Meier.

As I mentioned earlier, Montreal will be without Shea Webber tonight and that opens the door, not just for Crosby, but for Letang as well. He has totaled six points in his last five games along with seven blocks and 18 shots on goal. That’s good for 7.1 SD points in that span and 9.6 when you account for the multiplier. A Crosby/Letang stack should be considered against a wounded Montreal team.

I had Severson on my list for last night’s slate and he delivered with two assists and one shot on goal ending the night with over 9 SD points with his multiplier of 1.25X. Now at 1.35X, I still want to ride the hot hand who has now tallied nine points in his last eight games.

In one game against the Hurricanes this season, Severson notched a goal and finished the night with 6.25 SD points without his multiplier. Pairing him with RW Wayne Simmonds (2X) could be a sneaky stack as Simmonds has four points in his last three games.

As a UMass Lowell alum, I’m pumped to have the former Riverhawk on my list for tonight’s slate. Helly, besides his last start on Tuesday, has been playing excellently for Winnipeg with a record of 3-1-1 in his last five. Outside of his last start, he averaged 13.6 SD points in his previous four games and that average jumps to 18.36 with his multiplier.

The icing on the cake is that he has owned San Jose this season in the two games they’ve played. He has a .965 save percentage and a gaudy average of 19.6 SD points in those two games. Factor in the 1.35X and that brings it to 26.46. Hellebuyck should have his name all over the leaderboards tonight.

Using the Cash Out Feature