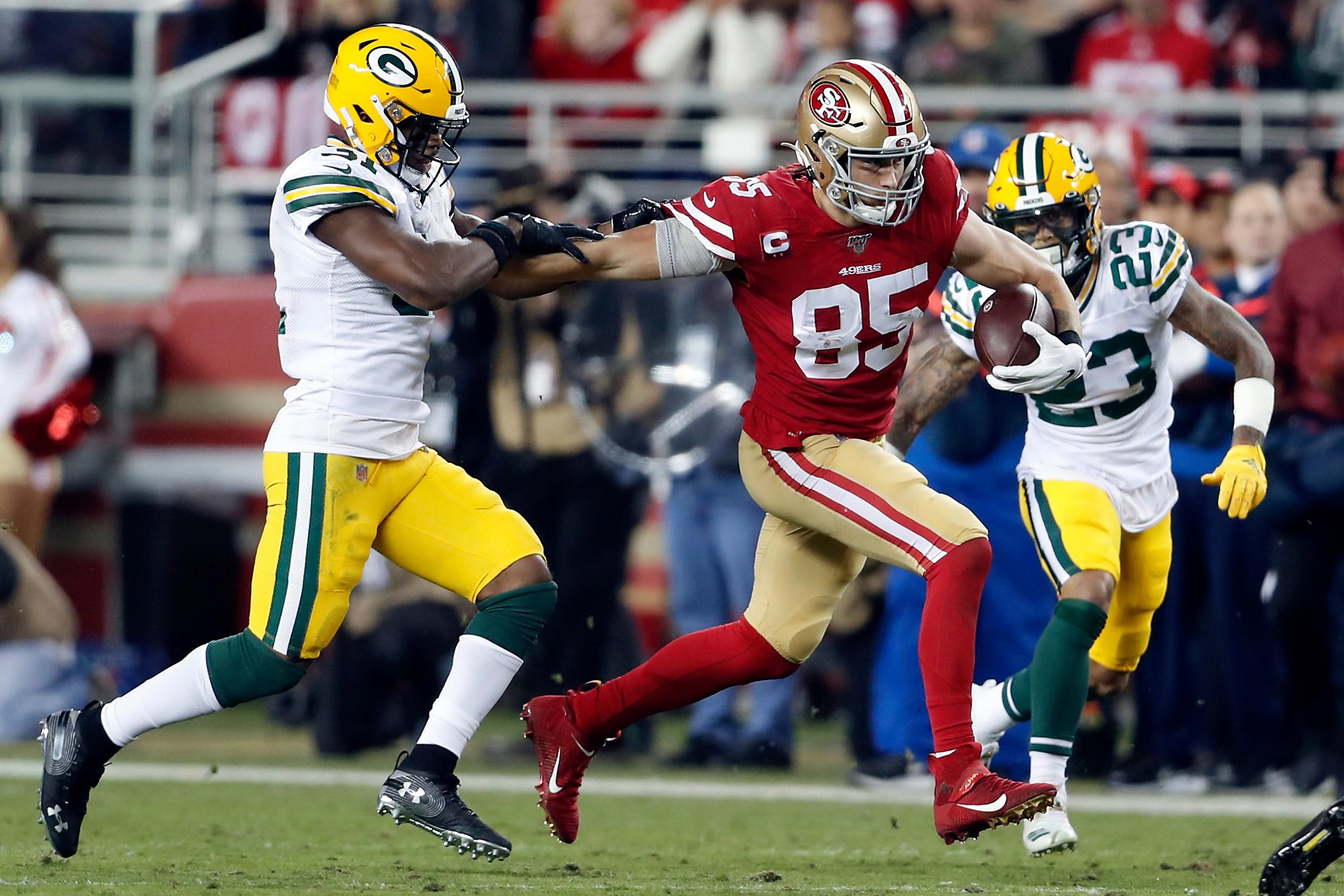 The NFC championship game is finally here and it features two of the most successful franchises in NFL History. There are many narratives swirling around this match-up between the 49ers and Packers. The Packers will attempt to bounce back from getting blasted 37-8 in their previous meeting in Week 12. Aaron Rodgers will be trying to make his second Super Bowl. Jimmy Garoppolo will be trying to make the Super Bowl in his first full year as a starter. However, the key focus here will be which of these players will put up the best stats in this game and put you in the best position to win some cash! Let’s take a look at which quarterback has the advantage in this match-up.

If you haven’t entered yet you should check out the NFL Hail Mary Contest that will be giving out $5,000 in total prizes!

While Aaron Rodgers seems the safer choice, it is hard to forget what happened in their first meeting and how not many things have changed since then. In that game, Rodgers threw for 104 yards with one touchdown and put up 10.46 fantasy points. The problem was that Rodgers only had Davante Adams as a reliable pass-catching option. Adams was targeted 12 times and he caught 7 passes for 43 yards and one touchdown. The next receiver was Geronimo Allison who caught just 3 passes for 9 yards. With a lack of receiving options, it exposed the Packers to the 49ers’ pass rush which sacked Rodgers five times.

What is scary for Rodgers is that his receiving issue still exists and the 49ers were without two key pass rushers — Dee Ford and Kwon Alexander — for that game. The 49ers are healthy upfront and there should not be any reason why they can’t get after Rodgers again. On the other hand, Garoppolo will not be facing off against as an intimidating defense as Rodgers and he has a better selection of weapons to utilize. He scored 18.22 fantasy points in the prior match-up and he should be around there again with the help of George Kittle, Emmanuel Sanders, and Deebo Samuel. Add in the fact that Garoppolo has a multiplier of 1.35X and Rodgers is at 1X, circumstances strongly favor Garoppolo to have a better day.

Aaron Jones has been a fantasy star all season but this match-up against the 49ers does not look favorable, especially with his multiplier at 1.15X. In the first match-up, Jones ran the ball 13 times for 38 yards which amounted to 3.8 fantasy points, his 2nd lowest number of the season. With that being the case, this came down to the 49ers top backs in Mostert and Tevin Coleman. Coleman had his best game of the season in the divisional round putting up 105 yards rushing, two touchdowns, and 24.5 fantasy points. However, before this game, Mostert was the one who finished the season as the 49ers’ top back. In the last five games of the season, Mostert averaged 13 carries, 76 yards, 1 touchdown and 18 fantasy points per game. Coleman, in that same time frame, averaged 4 carries, 19 yards, 0 touchdowns, and 2.4 fantasy points per game.

While Coleman is the one coming off a great game, I could see the 49ers switching back to Mostert as the primary back given his late-season success. In addition to that, Mostert also had a good game himself last week carrying the ball 12 times for 58 yards. With Mostert’s multiplier at 1.95X as opposed to Coleman at 1.7X, Mostert gets the slight edge here.

If you had Davante Adams as your champion in our single-game contest last week, you probably earned some cash! Adams caught 8 passes for 160 yards and two touchdowns. Adams’ champion multiplier was 2.25X so that brought his fantasy point total up to 76.5. Adams has been on a great run for the last several weeks and I do not see him slowing down in this game. With the limited receiving options outside of Adams, Rodgers will be looking for Adams all game.

In the 13 games Adams has played this season, he has only been targeted less than eight times twice. In his 13 games this season, he has 91 catches in 138 targets for 1,057 yards and seven touchdowns. If you average that over 16 games, he has 112 catches in 170 targets for 1,301 yards and nine touchdowns. Those projected stats would have ranked him 3rd in receptions, 2nd in targets, 4th in yards, and tied 3rd with touchdowns. You may not think of him as a superstar receiver but the numbers say he is. The match-up against this 49ers defense caters to Adams putting up big numbers as well.

In their scheme, the 49ers always keep star corner Richard Sherman on the right side of the field. So the Packers can move Adams around the formation to avoid that match-up against Sherman. In addition to that, it is fair to expect the Packers to be trailing at points in this game where they have no choice but to throw. With no 49ers receiver nearly as consistent as Adams, this is an easy choice.

Regardless of the difference multiplier between Kittle at 1.5X and Jimmy Graham at 2.25X, you have to go with Kittle every time. There is some concern here as he suffered an ankle injury against Minnesota, but you have to believe he is going to be ready to go for this game. Kittle finished the season with 85 catches for 1,053 yards, five touchdowns and an average of 12.9 fantasy points per game. Graham, on the other hand, had 38 catches for 447 yards, three touchdowns and an average of 5.1 fantasy points per game. In addition to that, the Packers are ranked 17th in the league in fantasy points allowed to tight ends while the 49ers are ranked 5th in that category. With Kittle hobbled, there would be certain matchups where you could make a case for Graham but this just isn’t it.

However, with the strong 49ers run defense they are going up against, I believe they are going to have a harder time scoring touchdowns in the Red Zone than usual. The 49ers with their run game and multiple receiving options will have an advantage in Red Zone offense. With that being the case, Crosby should have more chances for field goals than Gould. Add in the fact that Crosby has the higher multiplier value of 2.5X, he gets the edge over Gould here.

Adams was the ideal champion pick last week in the Packers game against Seattle and I believe that will be the case again this week against the 49ers. For all of the reasons detailed above, Adams is just more reliable than any player in this draft group to put up numbers. He has the track record for this season and he has an advantage match-up wise against the 49ers defense. He doesn’t have the highest ceiling with his multiplier being at 1.95X but his floor is so much higher than everyone else’s, which makes him by far the safest champion pick on the board.