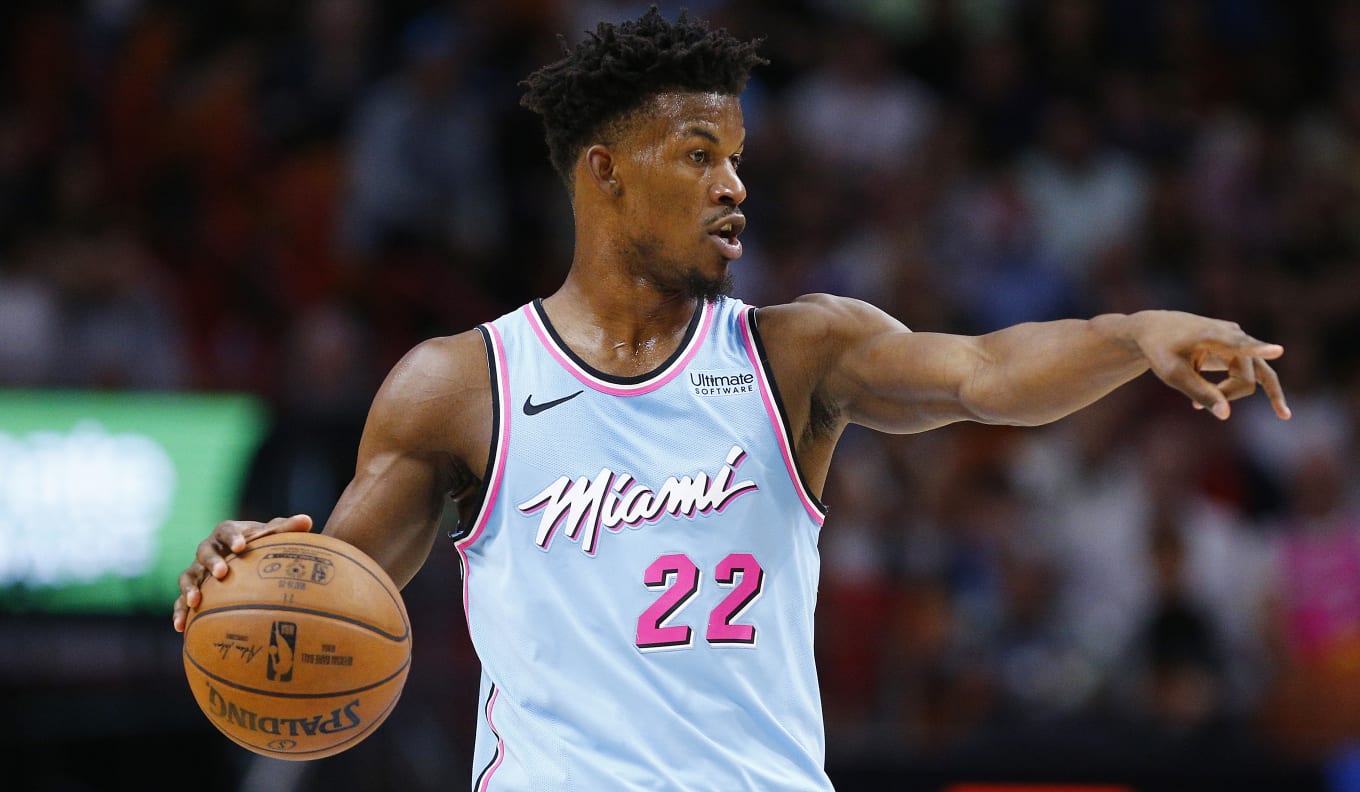 Every few weeks or so we have a massive 10 game slate Wednesday NBA slate and this week is one of those weeks. The depth of talent is deep at every position when there is this many games but we got a rare amount of depth in the first tier of guards. On Monday, Damian Lillard and Ben Simmons were the only guards in the 1X-1.3X tier. Today we have nine players in this tier. Hard choices are going to have to be made here to build your lineup. So without further ado, let’s get right into my pick for a guard in the 1X-1.3X tier.

Enter our NBA Jumpshot contest where we will be giving out $15,000 in cash prizes!

It seems like the boring pick to go with Harden here with nine other guards in this tier but given the match-ups, it is simply the best choice. Harden has by far been the most consistent guard all season long. He is averaging 37.8 points, 6.2 rebounds, 7.5 assists, 1.7 steals and 62.9 fantasy points per game. He had a dud against the Thunder on January 9th where he scored 28.25 points. This was the first time since November 5th he has scored under 40 fantasy points. In that same span, he has scored over 70 points 13 times.

Tonight he is squaring off against the Blazers who are ranked 21st in the NBA in defensive efficiency and have given up the 3rd most fantasy points to point guards. While Harden is technically listed as a shooting guard, his role in Houston’s offense is that of a point guard’s. The other guards in this tier include Luka Doncic (1X), Kyrie Irving (1.25X), and Ben Simmons (1.2X). With those guys having some consistency questions and more difficult match-ups, Harden is the guy you can rely on most to deliver for you. With Portland having no one to guard him, he should do whatever he wants in this game.

Brogdon’s game on Monday against Philadelphia was his first full game since December 22nd. He looked like he was back to the Brogdan of early in the year. He put up 21 points, 9 assists, 7 rebounds, 1 steal, and 46.75 fantasy points. It seems like this could be a sign of things to come and with his match-up against the Wolves, he is bound to have another 40+ point fantasy game. The Wolves are ranked 22nd in fantasy points allowed to point guards and are ranked 16th in the league in defensive efficiency. With the Wolves playing Shabazz Napier and Jeff Teague most of the minutes at point guard, Brogdan should be licking his chops. With a multiplier of 1.5X, Brogdan is primed to be a great value play tonight.

While the first tier of guards is stacked, the same cannot be said for the third tier of guards. I would recommend that you fade this group altogether but if you want a high multiplier guard with upside Coby White is the choice here. White has had a very up and down rookie season. He has some games where he looks completely lost and others where he looks like a budding star.

White has had five games this season in which he has scored over 20 points. In those games, he is averaging 38.45 fantasy points per game. When you factor in the multiplier value of 1.8X, that brings the number up to 69.2 fantasy points. White will be facing off against the Wizards who are last in defensive efficiency and rank 23rd in the league in fantasy points allowed to opposing point guards. If White is going to pop and have another fantasy score in the high 30’s, it will be against a team like the Wizards. White is a very risky pick but if he pans out for you, it will be a game-changer for your lineup.

After a season in which turmoil was associated with Butler, this season he has flipped that script. He is averaging 20.7 points, 7.1 rebounds, 6.5 assists, 1.9 steals and 44.9 fantasy points per game for a Miami team that is 27-12 which is good for 3rd best in the eastern conference. He has been very consistent all season and he has 13 games this season in which he has eclipsed the 50 fantasy point mark.

With this match-up against the Spurs, he is bound to get at least 50 fantasy points. As you probably know at this point, the 17-21 Spurs are not the team they used to be. That has been most represented on the defensive end of the floor. They are currently ranked 24th in the NBA in defensive efficiency. They have also had a hard time guarding small forwards such as Butler. They are ranked 25th in the NBA in fantasy points allowed to opposing small forwards. This has all of the makings for Butler to have one of his big 50-60 point games. If you factor in his multiplier of 1.3X, he is poised to get you 65-78 fantasy points.

With Richaun Holmes out for 2-3 weeks, Bjelica is going to continue to play big minutes and he has consistently shown that he will take his game up a notch when given those extra minutes. If you factor in his 1.65X multiplier, he is averaging 62.4 fantasy points per game. As long as Bjelica stays at this high multiplier, he should be strongly considered every game.

The rookie was not expected to get much playing time this season but with Blake Griffin going down, he has gotten a chance to show off his ability. Doumbouya in the past seven games is averaging 12.6 points, 5.7 rebounds, 1 steal, and 25.5 fantasy points per game. He has also shown the ability to have high upside games as well. He had a game where he scored 33.5 fantasy points and another where he scored 42 fantasy points.

What gives me optimism that he could have one of these big games, is that he is facing the Celtics who have allowed a similar player to have a big game. On Christmas Day, the Celtics allowed 24 points, 6 rebounds, 3 three-pointers, and 39 fantasy points to Chris Boucher. He has a very similar game to Doumbouya as they are both energetic big men who can shoot three-pointers. If Doumbouya got at least 30 fantasy points, he would become a very valuable player at 2X multiplier.

After Jokic went through a bit of a rough patch, he has regained his superstar form in the last four games. He is averaging 29.8 points, 10.3 rebounds, 5.8 assists, 1 steal, and 56.6 fantasy points per game in the past four games. With his match-up, tonight against the Hornets, do not expect Jokic to slow down one bit.

The Hornets are dead last in the NBA in fantasy points allowed to opposing centers. That makes sense as Bismack Biyombo and Cody Zeller will be getting the lion share of the minutes at center. Jokic will be able to take advantage of both of them to rack up points and rebounds. The Hornets also rank 27th in the NBA in defensive efficiency. Given these facts, I would expect Jokic to reach at least 60 fantasy points tonight. Factor in the 1.1x multiplier and that gets him up to 66 fantasy points.

However, with the matchup against the Blazers, Capela has a good shot of exceeding his average. The Blazers are ranked 17th in fantasy points allowed to opposing centers, 25th in rebounding rate, 22nd in defensive efficiency, and they get their shots blocked the 12th most in the NBA. All of these numbers suggest that Capela should get a slight boost in points, rebounds, and blocks. With his multiplier being what it is, you should expect him to land in the 60’s.

Howard is coming off his best game of the season against the Cavs. He put 21 points, 15 rebounds, 2 assists, and 43.75 fantasy points. With Anthony Davis missing the last three games, Howard has looked like his old self. He is averaging 14.3 points, 11.7 rebounds, 1 block and 34.6 fantasy points per game. Davis’ status for this game is unknown but if he does not play, Howard should be getting heavy consideration. If you factor in his 1.7X multiplier for his average of the past three games, he is averaging 58.8 fantasy points per game. If you add in the fact that he is facing his former team the Orlando Magic, he should be extra motivated in this game. There are not great options here at the low tier center but if you want to pick someone from this group, Howard is your best bet.