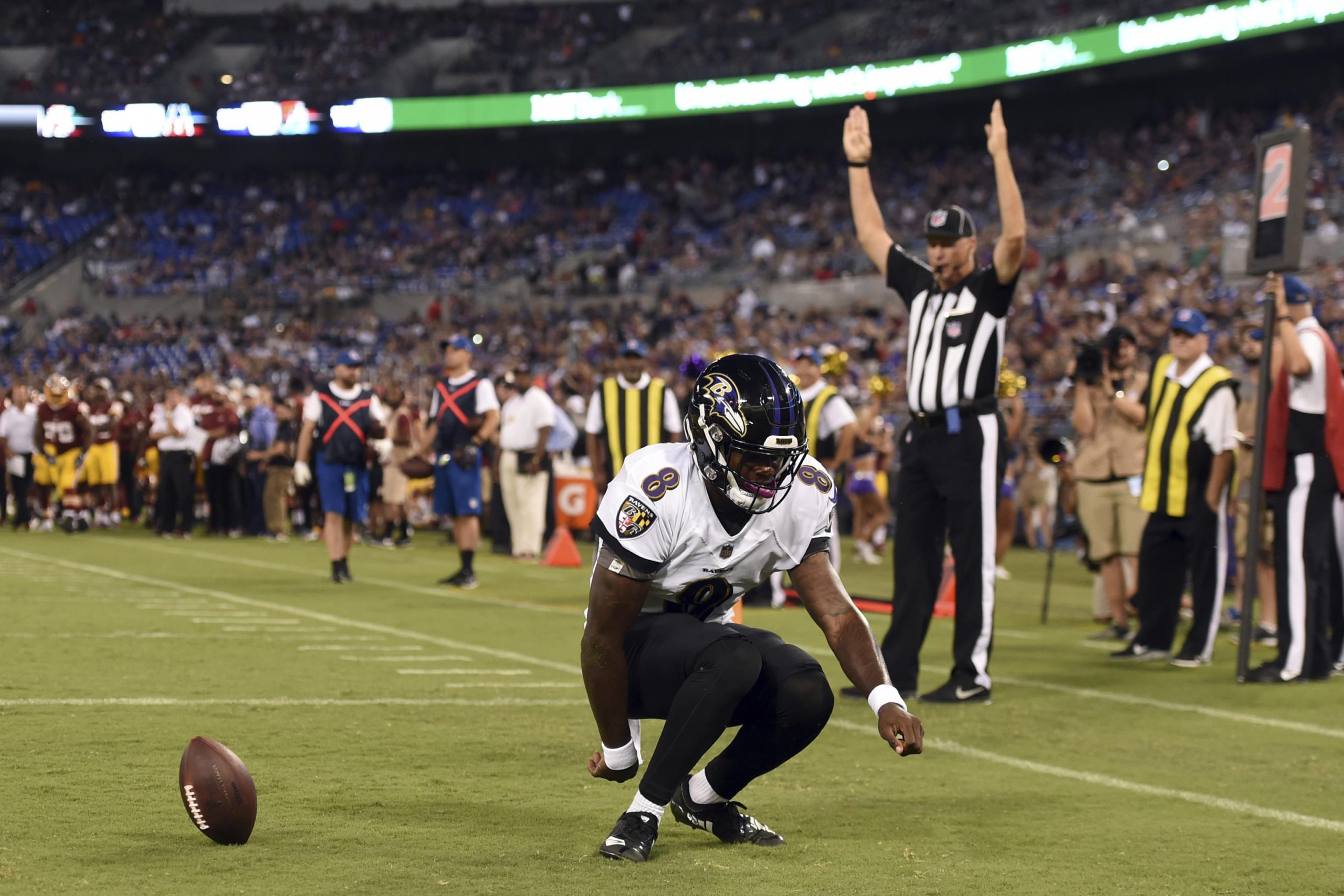 This game has the possibility to be over in a blink of an eye. Both teams are in the top three when it comes to yards rushing per game with Baltimore and Tennessee averaging 206 and 139 respectfully.

It goes without saying that Head Coach Mike Vrabel will want to lean on his workhorse running back, Derrick Henry. He would love to keep Lamar Jackson on the sideline for as long as he can, but the game flow might now allow for that. If Jackson and the highest-scoring offense in the NFL jump out to an early lead, as they often do, Henry’s chances to carry the rock will dwindle.

My advice to you is this: pick your lineup based on how you think this game will go.

Be one of the first to make your lineup for Sunday’s NFL Hail Mary! We will be giving out $5,000 in total prizes so don’t miss out!

Both Lamar Jackson and Ryan Tannehill are making their way into my lineup whether at a Super Flex spot or the Champion spot. Unfortunately for Mike Vrabel, you cannot take down the Ravens by giving Derrick Henry 34 carries and only attempting 16 total passes like they did last weekend in New England.

This Ravens team has taken over games early by gaining a quick lead and running the ball down opponents’ throats. Out of Jackson’s 43 total touchdowns, 24 of them have come in the first half and 29 have them have come while his team is leading. I expect the Ravens to do what they’ve done all year and get up early which will force the Titans to abandon the running game and use Tannehill’s arm.

This works out perfectly for our game script because of how good Tannehill has been with his team trailing. In these situations, the veteran signal-caller has completed almost 72% of his passes, thrown for over 1,400 yards with 15 total touchdowns and has a smooth quarterback rating of 115.7. This is a game where you want both quarterbacks in your five-man lineup somewhere.

The injury situation with Mark Ingram is something to watch closely for a bevy of reasons. If Ingram is able to shake off his calf injury, he is a must-start and will be the only running back I want exposure to in this game.

I understand how other-worldly Derrick Henry has been in his last seven games, but I do not see a scenario where he gets the amount of workload that he has been seeing in recent weeks. In situations where the Titans are trailing in the last four minutes of a game this season, Henry has received a total of two carries. However, if Ingram were unable to lace up the cleats on Saturday night, Henry becomes convincingly more valuable as does Ingram’s backup, Gus Edwards.

Edwards could be a valuable play in this scenario as he filled in nicely for Ingram in week 17 to the tune of 130 yards rushing on 21 carries and has historically been a reliable runner averaging 5.25 yards per carry over his first two years in the league. Call me crazy, but of Ingram can go, I am fading Henry.

Marquise “Hollywood” Brown has been too inconsistent for me to endorse him. He will occasionally find the end zone on a deep-ball but this offense runs through their backs and tight ends. My eyes are on the Titan’s wideouts on Saturday as I will confidently fade the Ravens’ receiving core.

The rookie-sensation A.J. Brown has been shut down in two of his last three games and draws a tough matchup against the Ravens’ physical corners, Jimmy Smith and Marlon Humphrey. Despite his two duds, A.J. Brown has been hot posting four games of over 100 yards receiving and six total touchdowns in his last seven games. He is someone you must start with his 1.85x multiplier.

As for Tajae Sharpe and Corey Davis, it is a shoot-your-shot scenario. Although Sharp has not had consistent targets like Davis, he has done more with his opportunities. When picking this far down the list I want a guy who can find the end zone and Davis has not done so since week seven. If you are looking to catch lightning in a bottle, Sharpe is the better bet.

Out of the Ravens’ 362 total targets this season, 181 of them have gone to tight ends. This team has made a habit of using the running game to set up plays for their tight ends in between the numbers. Mark Andrews has benefited from this the most leading the team in targets (98), catches (64), yards receiving (852) and touchdowns (10).

As for Jonnu Smith, I’m staying away. I do believe that the Titans will need to throw in this game but their wide receivers will be the ones to benefit from this. Even with a multiplier of 2.3X, I do not trust Smith’s usage as he is averaging under three targets per game.

I’m all in on Andrews for this one as his ankle injury does not seem to be something that will hold him back. Having Jackson’s number-one target at 1.9X is a blessing.

Throw Greg Joseph out of the window because I’m not rostering a kicker that hasn’t attempted a field goal yet this year. Justin Tucker, on the other hand, should be looked at heavily and will undoubtedly have a high ownership percentage.

The Ravens do like to go for it on fourth down minimizing Tuckers opportunities, but, this is a team that comes up with points a lot. In Tucker has this multiplier for all of his home games this season he would have averaged over 26 FPPG and would have had a total over 30 points in half of those contests.

Tucker makes sense with our game script and he is worthy of being your Champion as well.

It was between Lamar Jackson and Ryan Tannehill (2.4x) with the deciding factor being Jackson is a sure thing. You could make the argument that you would want the person who is not the ‘sure thing’ to be your Champion, but Tannehill has just as much a chance to throw up a goose egg as he does to top 50 points.

If Mark Ingram can’t go, I also would entertain Gus Edwards in the Champion slot at 3.6x and if you have a few lineups going, Justin Tucker could also prove valuable at 3.9x. He would have averaged 39.49 FPPG this season in home games with that multiplier.