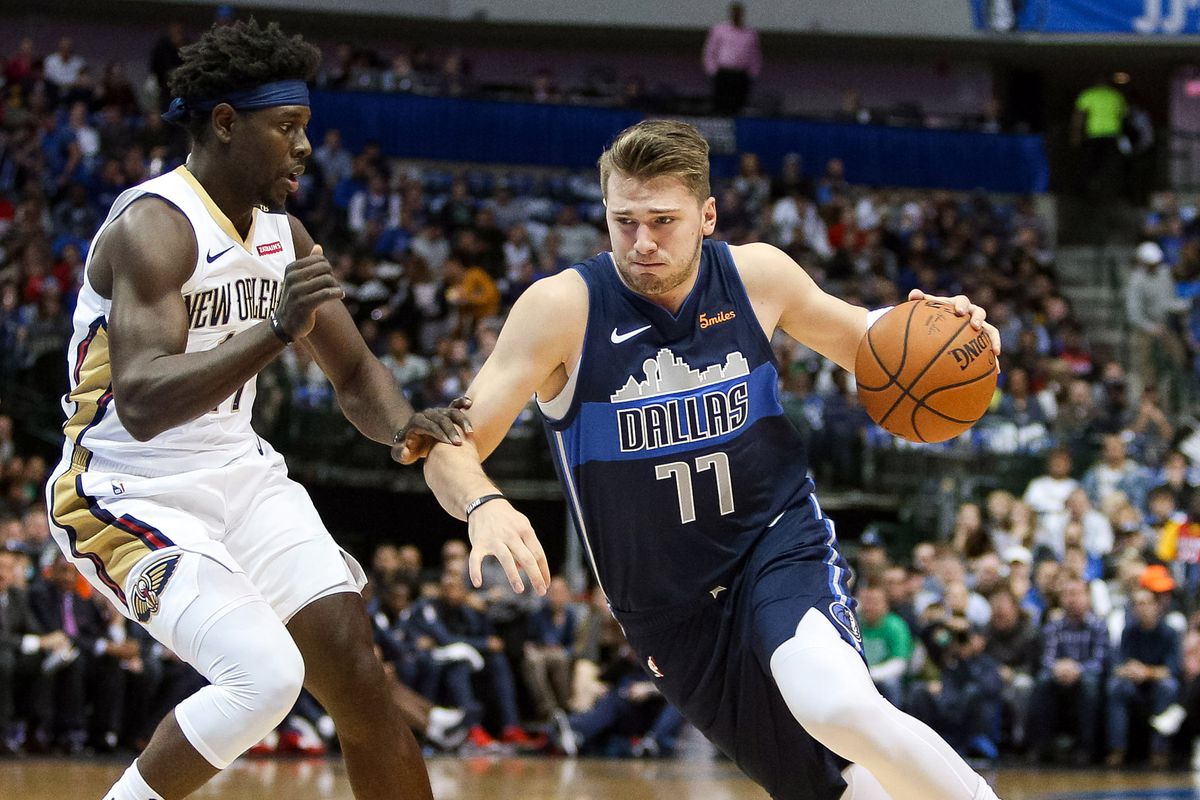 With slates like tonight where there are nine games, it makes it fun and stressful to make a lineup here on SuperDraft. You have the ability to make any lineup combination you want with a large amount of options to choose from. After reviewing this draft group, the depth of choices lies between the 1.35X-1.65X multiplier range. There are so many options there that I will be picking two forwards and two centers from that range in replacement of an option from the 1.7X-2X range. This strategy will be helpful for you in tonight’s NBA $10,000 Daily Dime where first place gets you $1,250!

There were high hopes for Luka Doncic coming into his sophomore season in the NBA but no one could have seen what he has done so far this year coming. He is averaging 29.4 points, 9.7 rebounds, 8.9 assists, 1.2 steals and 57.1 fantasy points per game. He also leads the league in usage rate at 38.8%. In typical circumstances, he is close to the level of Harden and Giannis where he should be heavily considered every night even at 1x.

However, tonight the injury circumstances for the Mavs make him even more appealing. The Mavs are going to be without Kristaps Porzingus and Tim Hardaway Jr. for the 3rd straight game. Which means everything is put on Luka’s shoulders. In the past three games, he is averaging 35 points, 11.7 rebounds, 8 assists, 1 steal, and 66 fantasy points per game. Against a weak Bulls team, Doncic is no-brainer tonight with the load he has to carry.

After a slow start to the season, Donovan Mitchell and the Utah Jazz are coming on strong. Mitchell is having the best season of his career averaging 25.1 points, 4.5 rebounds, 4.3 assists, 1.1 steals and 39.8 fantasy points per game. With Mike Conley out, he has gotten more ball-handling opportunities and he has taken advantage specifically with his playmaking. In the 8 games Conley has missed, he is averaging 25 points, 6.6 assists, 4 rebounds and 41.3 fantasy points per game.

With this match-up against the Pelicans it is reasonable to expect Mitchell to take his game up a notch. The Pelicans are ranked 23rd in the league in defensive efficiency and Mitchell put 37 points, 5 assists, 7 rebounds and 53.25 fantasy points the first time they faced. That was also with Conley starting at point guard doing most of the ball handling. With no Conley again and a favorable opponent in New Orleans, Mitchell is bound to out-perform his value at 1.4X.

Holiday is the latest guard to take advantage of an injury to bump up their fantasy value. With Malcolm Brogdon out the past six games, Holiday has taken full advantage being the starter. He is averaging 14.7 points, 7.3 assists, 2.5 rebounds and 31.5 fantasy points per game. In the 28 games before that, he was averaging 9.9 points, 2.7 assists, 2.6 rebounds and less than 21.3 fantasy points per game.

The highest number of fantasy points he has had in this stretch is 43.25. With a match-up against the Hornets who are ranked 26th in the league in defensive efficiency, he could definitely reach that level of performance again. With a 1.75X multiplier factored into his average the past six games, he is averaging 53.6 fantasy points per game. If he gets 40 or more, his number will get into the 70’s. Holiday is an excellent bet to make at this multiplier.

I discussed in the beginning how there was a surplus of depth at forward in the 1.35X-1.65X range. That is the complete opposite of the top tier. The only three players here are Giannis, Jayson Tatum (1.3X) and Domantas Sabonis (1.3X). With the match-up being favorable, Giannis is the easy pick here.

Tonight will be the 2nd half of home-home with the Spurs. The Spurs held Giannis relatively in check on Saturday as he only scored 48 fantasy points which is 13 points below his average. In the past, you would like a Gregg Popovich coached team to hold down a player like Giannis after playing him two days before. However, these are not the Spurs of old. The Spurs are ranked 24th in the NBA in defensive efficiency and with that, the odds simply don’t favor the Spurs to hold him down again. With Tatum and Sabonis much more inconsistent, it will be very tough to fade Giannis here.

Hayward just can’t catch a break since he has been in Boston. He was arguably Boston’s best player the first 7 games of the season averaging 20.3 points, 7.9 rebounds, and 4.6 assists for an average of 38.8 fantasy points per game. He then broke his hand, was out for a month and it took up until these past three games to start round back into form. In the past three, he has averaged 17.6 points, 7 rebounds, 3.3 assists and 36.8 fantasy points per game.

On top of him getting back to where he started at the start of the year, he has fortunate circumstances that will give him an even bigger boost. Kemba Walker will still be out with the illness so he will get more opportunities to handle the ball and they are facing the Wizards who have the worst defense in the league. All of the signs are there for Hayward to pop and if he does, he’ll provide great value at 1.55X.

My 2nd pick out of this deep tier will be TJ Warren who has been a very nice addition to a surprising Indiana team. Along with Holiday, he has received a fantasy bump due to Brogdon’s injury. In the six games Brogdon has been out, he is averaging 19.7 points, 5.2 rebounds, 2.7 assists, 1 steal and 34.5 fantasy points per game. Before that, he was averaging 17.5 points, 3.5 rebounds, 1 assist, 1 steal and less than 27.9 fantasy points per game.

His fantasy points average goes up to 55.3 per game once you factor in the 1.6X multiplier. With the favorable match-up against the Hornets, Warren could pop and score in the 70’s for you.

When you think of Gobert, his scoring ability is never the first thing that comes across your mind. That is often why he can get edged out by the Embiid’s and Jokic’s of the world. However this past month he has made his mark offensively. In the past 15 games, he is averaging 16.4 points, 14.8 rebounds and 1.7 blocks per game.

He did not play in the Jazz’s first game against New Orleans but this is a solid match-up for Gobert. Gobert scores all of his points around the rim and the Pelicans are ranked 26th in the league in points per game allowed in the paint at 51 per game. The former Jazz center Derrick Favors has helped out the rebounding situation for the Pelicans, but Gobert should still be able to take advantage in that area.

With most back-up centers not three-point shooters, there is a low level of variance for the Centers in the 1.7X-2X range. With no key injuries and a stacked middle tier, we have two picks starting with Holmes. After he played 34 minutes against the Pelicans on Saturday, it marked the first time all season Holmes has played seven straight games of over 30 minutes.

Between injuries and the good play of Daniel Theis and Robert Williams, things started out very slowly for Kanter in Boston. However, since Williams got hurt back on December 6th, Kanter has really found his stride. In the past 10 games, Kanter is averaging 12.3 points, 11.6 rebounds, 1.6 blocks and 34.5 fantasy points per game. For the season his averages per game are 9.1 points, 8 rebounds, 0.9 blocks, and 24.1 fantasy points.

Expect this solid run for Kanter to continue against the Wizards who have the aforementioned worst defense in the league and are 28th in points in the paint per game allowed at 51.4. Kanter has been feasting in the low post during this stretch and he should be a monster on the glass as well in this game. The Wizards are 29th in the league in rebounding rate at 47.4. Given the opponent and current run Kanter is on, he is an excellent choice at 1.65X.